I was very surprised to read this today. I used to work with Spencer when I was at Warner Bros. Online. He was always very nice and fun to be around. 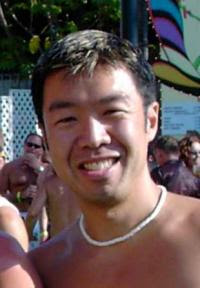 According to sources on board, Spencer Yu 46, a Los Angeles attorney, suffered cardiac arrest October 21 while on the Royal Caribbean Mariner of the Seas, which was chartered by Atlantis for a seven-day trip along the Mexican Riviera. A medical team attempted to resuscitate Yu for 45 minutes before he was taken to a Puerto Vallarta hospital, where he showed no brain activity. Yu was later taken off of life support. Rich Campbell, president and CEO of Atlantis Events and a friend of Yu's, said he was only aware of Yu’s “serious medical condition” when he was taken by the medical team off the ship. Royal Caribbean “doesn’t give us access to personal medical information as the charter of the ship,” Campbell said. “We’re simply not given that information. It’s a private matter.”

Live each day to the fullest, kids.
Posted by Vampire Hours at 1:07 PM

That is so sad. You know, I think Pat was on that cruise. He just returned.

Yeah...I think Pat was on that cruise. I'll have to check with him about that. Very sad.